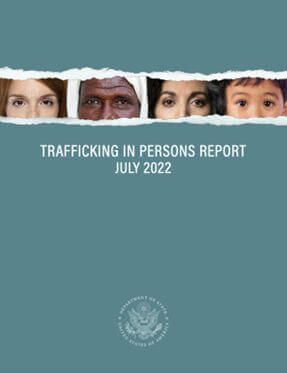 The 2022 Trafficking in Persons Report was released this July by the US State Department. The report highlights critical issues in human trafficking, including the “inequitable impact of human trafficking on vulnerable and marginalized populations.” It focuses on China’s Belt and Road Initiative, clean energy, the climate crisis, and data collection all through the lens of trafficking. Below are our takeaways from this year’s report:

1. Survivor Engagement in the Anti-Trafficking Movement

The TIP report opened by emphasizing the critical nature of consulting with survivors of human trafficking. We agree! From developing legislation to designing programs, lived experience is vital to advancing the movement forward and minimizing unintentional harm. Advisory councils and boards such as the United States Advisory Council on Human Trafficking and the International Survivors of Trafficking Advisory Council rely on survivors’ input. Likewise, countries like the UK, the Philippines, Guyana, Rwanda, and the Netherlands consult survivors on their anti-trafficking action plan (pages 10–14). Similarly, LifeWay Network also has a survivor committee of former residents who have continued to provide support in LifeWay program development. The anti-trafficking movement cannot thrive without the expertise of survivors, and at the same time there are considerations the report outlines for how to avoid retraumatization:

Have you heard of the Belt and Road Initiative (BRI)? The People’s Republic of China’s BRI is a trillion-dollar infrastructure economic integration plan of action that connects the resources of 144 countries and counting. This plan allows the government to have increased access to international raw materials and technological developments while building relationships with participating countries. While the project employs PCR nationals, there are laborers from developing countries as well. Due to lack of oversight and the international nature of the project, this initiative has led to accounts of labor trafficking. The report calls for more involvement from involved countries, stating that: “All countries should be able to pursue development opportunities without sacrificing their respect for human rights.

The report talks about the United States’ work and efforts to combat forced-labor goods from entering US ports. One piece of legislation highlighted in the report that we have focused on at LifeWay is the Uyghur Forced Labor Prevention Act, which fights against the import of goods made through the forced labor of Uyghur Muslims in Xinjiang, China.

The TIP Report frames the clean energy industry and the transition to clean energy as a field that must maintain ethical working practices as it grows and combats our climate crisis. Clean energy’s expansion calls for an increased amount of key mineral inputs and expanded mining activities. However, human rights violations in the clean energy supply chain are already occurring. For example, the production of silicon metal necessary for clean energy technologies is linked to state-sponsored forced labor in the Xinjiang Uyghur Autonomous Region of the People’s Republic of China (page 38). Global labor standards in supply chains must be duly enforced in order to initiate “clean” non-exploitative labor in clean energy.