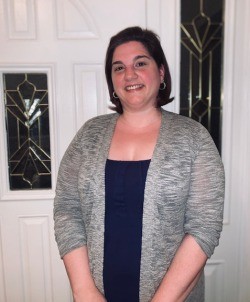 Fortunately for LifeWay Network, when Catherine Mason was furloughed during the Covid-19 pandemic, she didn’t spend time lounging on the couch. Instead, she posted her resume.  Following her passion and being open to new challenges has been a hallmark of her career and a strength she brings to her role as Director of Development & Leadership Giving.

Raised in Yonkers in a large and diverse family with Italian roots, Catherine was the first woman in her family to go to college. She chose the College of New Rochelle, a women’s college that provided an empowering and diverse environment where women’s voices were not stifled. She majored in communications and international relations, with every intention of becoming a war correspondent for the BBC. That career path never got off the ground. Catherine discovered that she and air travel are not compatible.

Undeterred in her quest to work in media, Catherine worked as an associate producer for News 12 in Westchester while in college, and after graduation, took a job with Lifetime Television.

Downsized from that job after September 11, Catherine began volunteering to lead a reading group for the Jewish Guild for the Aged and Blind. This experience proved so enjoyable, she decided to focus on working with seniors.  A job with One Stop Senior Services in New York City launched her career in development and gave her a broad-based education in non-profit work. “You wear many hats with a small non-profit. Nobody has just one job. And everyone is a fundraiser.”

She has worked in development exclusively since then, at various agencies and as a consultant for human services non-profits. Each position has allowed her to expand her skills and provided progressively greater challenges and responsibilities.  “I have always been lucky to work for non-profits whose work I can align with 100% and which have some sort of greater meaning for me. In development, you’re telling the story of an organization. You’re raising money for this non-profit. To do that well, you have to believe in what you’re doing.”

Catherine enjoys the female-led environment at LifeWay Network and looks forward to the opportunity to build new giving programs that enable LifeWay to continue its vital mission.